The Flappy Bird app was “flapped down” (removed) by its creator from both the Apple App Store and Google Play on 9 Feb 2014 (Sunday). Released on 24 May 2013, Flappy Bird hit the roof in recent months being one of the most popular mobile game.

I was in a restaurant enjoying buffet with my family last Sunday and I was amazed there were at least 10 people, seated sparsely in their own group, were playing the infamous Flappy Bird, with the entire restaurant filled with the distinctive “ting” … “ting” … and “punching” sound and frustrated grunts.

It was only 2 weeks ago when I get to know Flappy Bird. Being NOT a gamer, I’ve paid no attention to it until one of my colleagues WhatsApp me an article from CNET on the creator of Flappy Bird is earning $50K a day!

I couldn’t curb my curiosity and downloaded Flappy Bird on my Samsung Note to check why a hearsay simple and yet frustrating mobile game is cooking up a storm. Boy I was frustrated – I can’t even clear the first “pillar” on my 5 tries! Next, you’ll have an incessant crave to break your own high score. Flappy Bird is indeed a simple yet highly addictive game. No, I’m not addicted to it, I don’t think I’ll be … not to gaming. But I’m having a mixed feelings of envy and admiration to the creator of Flappy Bird – a 29-year old independent Vietnam-based game developer, Dong Nguyen. His Flappy Bird is a solid proof that a successfully viral mobile app game need not be graphically fanciful and developed by big studio. Flappy Bird is such a simple game, with only one control – tap (to flap) the bird through the “pipes” and no Level 2; just keep flapping. Yet, ironically, it is extremely difficult to flap the bird through all the pipes. I’m very sure everyone who has started to play Flappy Bird will surely say – “WHAT THE …!”

Despite having developed a mobile game that flapped the world, the mixed and, mostly negative, comments (and threats) put a huge pressure on the developer that on 8th Feb 2014, Dong Nguyen put out these tweets : 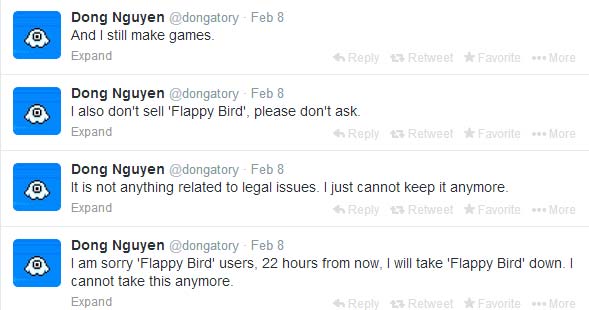 Wow! Can you imagine a developer, earning $50K a day from an app he created, and decided to take down the very own app, citing he is not able to take it anymore. From the anatomy of the app, I’m now curious on the psychology of a developer. Imagine you’ve a company business selling domestic knife (just an analogy) and, somehow, several people bought your knife and attempted murder. Is it your fault? Should you close down the knife business? This could be a rather relatively perspective question.

And here’s the joke – with Flappy Bird taken down from App Store and Google Play, people start leveraging on the craze putting up auction to sell their smartphones with Flappy Bird installed with bids as high as $43K. Nevermind that figure as it’s not important. The important thing, by common sense, is such auction will never materialize.

Following next is a distasteful death hoax spread by Huzlers :

“Flappy Bird developer Dong Nguyen has just been found dead in his home with a gunshot wound in his head. Authorities are confirming that Nguyen committed suicide by shooting himself in the head with a pistol. Authorities are saying that the sensational game Flappy Bird had something to do with the suicide. There has also been 7 reports of other suicides around the U.S. today alone. Flappy Bird developer Dong Nguyen has just taken Flappy Bird off app stores this morning and is believed to be the cause of the suicides.”

Nah, I don’t think this is real! Unless the bidder is crazy, else at such price, you could easily get any app outsourced.

Notwithstanding the trauma and psychological pressure suffered by the creator, mobile app/game creation indeed gives huge potential and opportunities to strike gold.

Technically, out of the box, mobile gaming app development platforms like Stencyl, GameSalad or Corona SDK could be used to develop games like Flappy Bird. My hunch is that if I would to (re)create Flappy Bird, I’ll be more tilted to using Stency (https://Stency.com). And you know what, if you go online and lookout for app templates, you can find a handful of Flappy Bird alike template from $10 to $30 already.

Morale of the story here is this – create simple and fun mobile game. In fact, inspired by Flappy Bird, I already have a couple of games flapping in my brain. At the end of the days, success of the mobile app/game, seriously, still depend on luck. (Hint: Opportunities will only knock at your door, if you tried; so start learning and developing).

Sorry, no posts were found.

P.S. Due to limited time, I can only work with a (very) small handful of serious solopreneurs. Hence, please contact me when you really have a concrete and feasible business plan! Only then can I help you to dominate your niche online!

JUST TO CONFIRM : This is for you only if you answer YES to the 3 questions below. Else, you're welcome to browse the site ...